Talking about Allies like the Inquisition and the Ecclesiarchy...

Joined Jun 7, 2008
·
319 Posts
Maybe some already know these one, but I like to share these litle tale that I encountered on the net with the people that dont read it yet, about the Inquisition and the IG.

Over the skies above the Imperial entrenchment is crossing an Imperial shuttle in descent trayectory, bearing the Ordo Xenos icon. The mere sight of the icon provokes uneasyness on some ranking officers, known to the legion for the use of not-too-human elite units such as Ogryns and Ratling snipers. The ramp lows and down walk a babe of 30-something years old (gorgeous) look bearing a master-crafted armor, troyan-like helmet and (very) airy dress; Crozius Arcanum in one hand and a fierce baroque crafted storm bolter in the other. Along came a fully armoured escort of Adepta Sororitas, the Sisters of Battle; all of them with pitch black hair and a brightly white strand of hair on the forehead resembling more merengue dancer Tongolele than X-Men Rogue character. 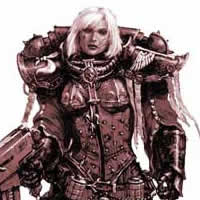 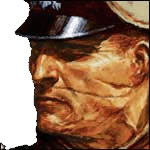 - I am Inquisitor Lady Lith Hem Castellanos, I demand to see the highest ranking officer in charge!
- I am the Senior Officer, Colonel Malvus Cicero, commander in charge of the 2nd Legion of Cadia, 5th Infantry Battalion, and this is my aide-de-camp, Commissar Tiberius Qastor.
- G'morning m'Lady...
- No doubt you have guessed the motive of my visit here at Saim Komt gentleman, I belong to the Ordo Xenos, and our mission is to remove the scum off the Imperium.
- You are most welcome here to fight the Eldar threat Lady Inquisitor an...
- You got me wrong Colonel, word has it you brought Xenos into your company, scum like Drussilia Ogryns and Ratlings from Malakart II, is that correct Colonel?
- No Lady Castellanos, that's a distortion of the truth. They were assigned to this regiment by Lord Castellan Qlipper, they're not Xenos, they belong to the Imperial Guard, they're elite, and definetly they are NOT scum.
- I'm here to do my job, not to argue Colonel, the situation is very simple; I'm gonna take them off, and if you have anything to say about it I'm gonna take YOU and THEM off. Take your pick... Colonel.
- But you will remove a valuable part of my regiment just because the praetors from Ordo Xenos are so blind to see their usefullne...
- Commissar Qastor, tell your Colonel to mind his tongue, he's standing on the most slippery ground.
- Colonel, may I remind you that Ordo Xenos outranks by far the authorithy of the local governor, Lord Castellan Qlipper?
- (*sigh*) Yes, you may Commissar... thank you for reminding me. You may proceed Lady Castellanos. I will report to the fleet this... 'action' immediately.
- Is that a pitiful intent of a threat Colonel?
- No-no-no-no my Lady, please... I need to report a sustantial lack of personnel to fight at the present time. Eldars are celebrating the reencarnation of I-know-not-whom, some sort of old Terran X-mas eve and I was planning to start my 2 months campaign today.
- I will shorten your campaign down to 2 days... You will take them out today Colonel. Before my arrival I contacted the Colegia Titanica and requested a demi-legion of Warhound Titans for you to command. Mayor Leif Hørten is in charge and will report to you within 1 hour. Looks to me you will earn another Macharian Cross. You are very lucky Colonel, very few have had the honor to see in action a Warhound company, least to have 'em under command. Happy??
- Do you see me complain My Lady?
- Good, I expect no less. Now, where are the Xenos?
- In their barracks, follow me Lady Inquisitor...

(a couple of hours later, back to deep space, aboard the flag ship Saint Celestine)

- Did all went right Lith?
- Yes Praetor. No troubles whatsoever...
- Odd... No resistance on behalf the Xenos?
- No Praetor... well, the Ogryns resisted to came aboard the shuttles, claimed it was too dark inside. It didn't cross my mind that those bulky bastards are frightened of darkness. And it seems that their wits are just enough to comprenhend a monosillabic dialogue, but Commissar Qastor helped me out.
- Executed someone the good ol' commissar to set example of obediance?
- No, he yelled at them "GET - IN... NOW! SHE'S - IN - CHARGE! MOVE!! And they moved... they did...
- What about the Ratlings?
- Oh, I thought those midgets were pretty smart, and expected them to hide out or dissapear when I requested their presence; but strangely they came willingly with a smile across their face, in single file, like kids going to a party or to get some free candy... Dumb small bastards. Should they know.

(in some lost dungeon aboard the S. Celestine spaceship, nine Ratling Snipers gather in circle in the center of the dungeon after lunch; think of them as hobbits with an irish accent just after their second breakfast)

RS1- Please remid me again how come we came willingly aboard?
RS2- Chill out, we got now three squares a day and air conditioning.
RS3- Poor Colonel, he'll suffer without us...
RS2- He's pretty much better without us. We got replaced by titans!! Titans!!
RS4- Great, now I feel important...
RS5- We could get killed anyway in the heat of the battle.
RS1- Yup, but I could have take my chances down there. Odds were good.
RS2- Have you noticed that this ship is full of babes?
RS6- Really?
RS2- Yup... lots of them. Big ones, ripe ones, gorgeous... squeeezable ones!
RS5- You are teasing us!!
RS2- No I'm not...
RS7- Tell us some more!
RS2- Starting with that Lith babe, I think she knows shells about our kind, otherwise she would have know we sleep in holes, and in this case in the basement underneath the barracks.
RS3- And that is interesting because...?
RS2- She stood by the trap door at center of the barracks, you know... the one with the grid on top.
RS9- And?
RS2- Well, I looked up. Her clothes are most transparent, and she wears no pelvic armor...
RS8- Did you manage to see something?
RS2- I saw Holy Terra...
The Rest- Noooooooooo!!
RS2- ...and the Eye of Terror too... then I woke you all up gentlemen. We're heading straight to our doom, but with and unbeatable view for the next three months. Enjoy life gentlemen.
All - Hubba Hubba!! Yeeeaaah!! Wooooooo!!
Click to expand...